My mum commented that he needs so much of love and not every child is like that.
I am glad that Ryan is turning to be a loving child rather than one who likes to bash people and be violent.

Of course, sometimes when we pissed him off, he will say "Go away! (In Cantonese)" or he will turn his face away and pretend to be angry! Sometimes he will also sit on the floor and mulled - a sign to show us that he is angry with something. Sometimes he will just be direct and say "Ryan angry!!"

Haha ... I just cannot help but to laugh, even though I know I should be disciplining him : )
Posted by Busy Bee at 7:13 AM No comments: 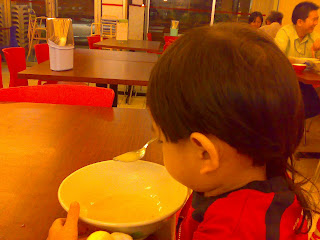 We went out for dinner just now and Ryan had some of my fish head bee hoon.
I think he really likes it and proceeded to empty the bowl by downing the soup - hands free!! 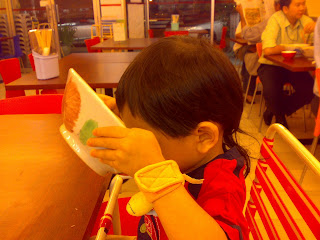 Thi is what is left after Ryan was done eating. 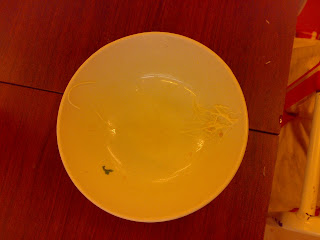 Ryan has this set of Sesame Street DVDs which I'd bought a while ago.
One of it was on the alphabelts.
Recently, this is Ryan's favourite and he has been asking for it almost everyday.

About a week ago, he was playing when I heard him singing the A-B-C tune.
Thinking that it was a coincidence, I sang it out to him.
He surprised me by being able to say the alphabelts in the correct order!
Granted, his pronounciation may not be entirely accurate, but for sure he can say them out to the tune of the A-B-C song!

I was delighted and his father was grinning ear to ear. Ryan, of course, not aware of what he has accomplished, continued singing and humming the song. He even ended his song with "Tell me what you think of me..."

well, mummy thinks you are an absolute delight and a real boy wonder!!!
Posted by Busy Bee at 12:21 AM No comments:

Yesterday we went to Aquaria. This is our second attempt to go. The first time, we encountered a queue which was estimated to be 1.5 hours before we got to the ticket counter. Needless to say, we took off.
Yesterday, hubby said to go again. This time it was better as there was practically no queue!!
The first thing that we saw was a tank of fishes which included this sting ray.
Ryan was facinated with it and told his father that it was a "Kite fish!" We were laughing. 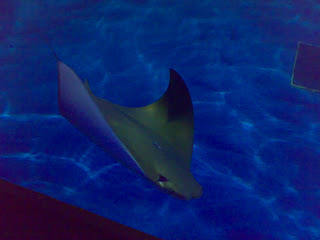 We then went along some more tanks and there was one tank where a tortoise was put on the ledge ... presumably for kids to pat. Ryan was patting its back and then he said "Turtle (he does not know the difference yet) bak bak (means bathe) come out already lor" ... meaning that the tortoise came out from the tank after its bath! Look at the tortoise below ... amazing. 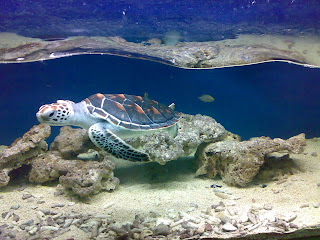 Then proceeded to a show case which has this animal in it. I'd forgotten the name of it but it was some rare species. Ryan took one look at it and said "Koala bear!" See if you can make it out from below. 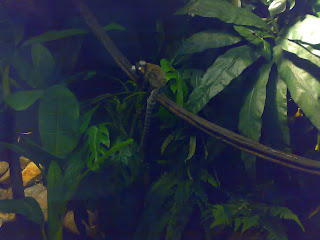 Almost at the end, there is a tunnel which we pass to see the marine life. It was indeed a bedazzling sight. One of it was this where the baby sharks were nursing from the mother. I pointed out to Ryan saying "Baby shark milk milk". He looked at them and then pointed to my chest ... "Ryan milk milk"... I guessed his craving must have been aroused by the sight of the shark nursing. 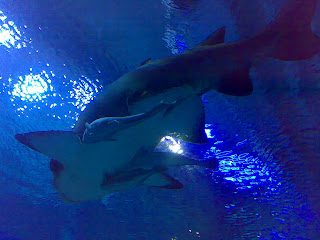 All in all, it was a great experiance for Ryan. I was really tired when we got back. Ryan and I napped for a while before we got up for some more play and food. What an evenful Sunday!
Posted by Busy Bee at 12:03 AM 1 comment: 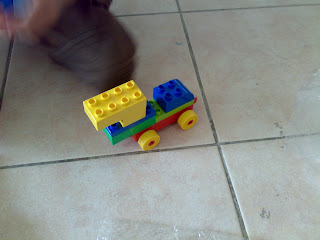 These are 2 Lego inventions of Ryan's.
He did this last Saturday and was the first time that he demonstrated his skill in building things out of Lego. This was a set which some friends bought on his first birthday. Before this, he could not build anything and pretty much relied on me and his father. I was a little panic as I am TOTALLY not creative ... luckily his father could help out in this area. Little Ryan proudly declare these as his car and a house. He proceeded to ask me to open the window .... My little darling is growing so well!! 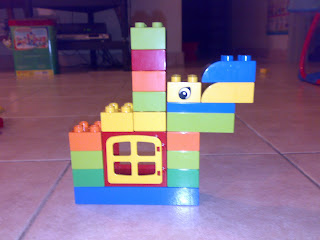 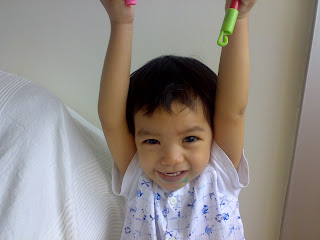 Ryan got hold of a marker pen on Sunday afternoon and proceeded to apply it on his lips ... after many times of watching me put on my lipstick.

Ryan is crazy about balls and balloons, really, not joking.
He has a great fascination for them ever since he was a baby.

I have always a never ending supply of balloons in the house and this has been one of the ways which I would cheer him up when he is cranky - pull out the balloons!!!

Recently, he found the place where I stash away the balloons and he has begun to pull them out himself. Today, he managed to push the stool to the cabinet where I had put his balloons and managed to empty the entire pack onto the floor. He even went a step forward and blew one of the balloons ... but he could not actually blow it up, just sufficiently so that the balloon expanded. He was very proud of himself ... and mummy was too.....
Posted by Busy Bee at 11:49 PM No comments:

Busy Bee
A working mother of a young man, an active girl and a mischevious 2 year old, a wife to a good man and a daughter to 2 amazing people. This is my story ...

What I write about